Season 2014 closed with a very dry finish for much of Western Victoria, leading to a significant number of crops being cut for fodder hay. Growers took the opportunity to tackle advanced ryegrass which had germinated in-crop and was now exposed in the stubble. The objective in these situations is to prevent these (sometimes resistant) plants setting seed and topping up the weed seed-bank prior to the following season.

By crop completion, ryegrass germinating under the crop canopy is well advanced and well rooted, having survived pre and post herbicidal applications. In this scenario, herbicides that provide rapid, robust control are required to prevent seed set.

Traditionally, paraquat has been the go-to option for preventing seed set in these situations. However, the advanced nature of the ryegrass and likelihood of post-application rainfall raised doubts as to whether paraquat would provide complete control.

Brett and Arron decided that the scenario called for a more robust chemistry and elected to trial Imtrade Para-Trooper.

Brett and Arron were very pleased with the level of control achieved by the application of Imtrade Para-Trooper. Imtrade Para-Trooper exhibited rapid brown out following application, with excellent suppression of ryegrass seed-set. Good rainfall was received during the post-application observational period. These conditions are normally conducive to weed re-growth post h

erbicidal applications, however, no major regrowth was observed. 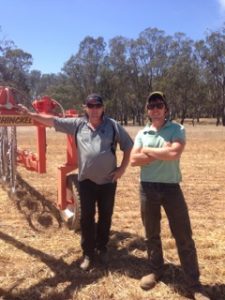 “We are constantly concerned with the spread of Group A and Group B herbicide resistance, equally we focused on prolonging the use of glyphosate.

A product such as Para-Trooper is a critically important tool in effectively reducing weed numbers. The real benefit of Para-Trooper is its ability to control large and hard to kill weeds quickly and economically”.