An investigation into the efficacy and safety of post-emergent herbicides applied to a first season Serradella pasture.

1.2 Target
Weeds are categorised into ‘Grass Weeds’ and ‘Broadleaf Weeds’. The predominant species at both sites were Annual Ryegrass and Capeweed.

The trial was conducted as a matrix design with each treatment applied to a 5m x 35m swath. 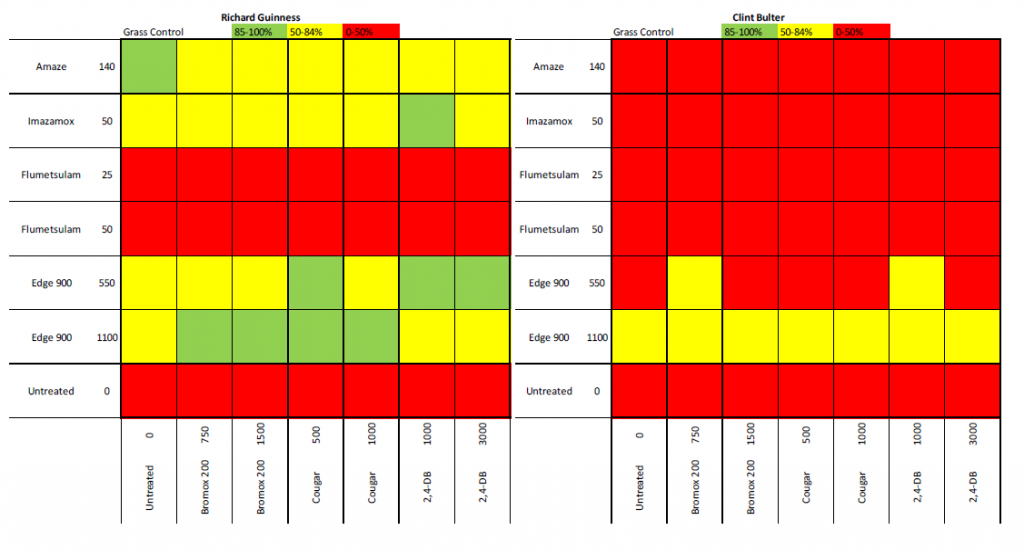 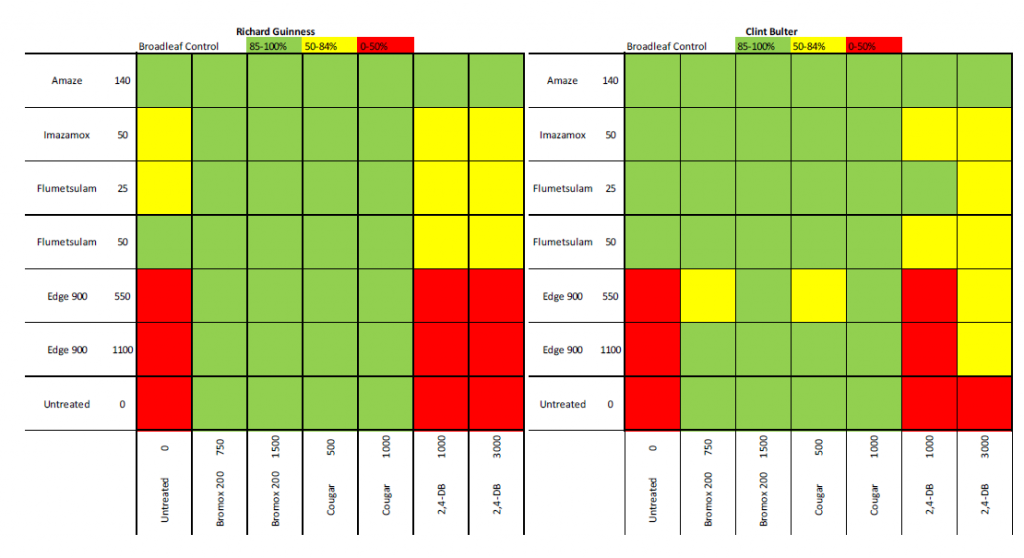 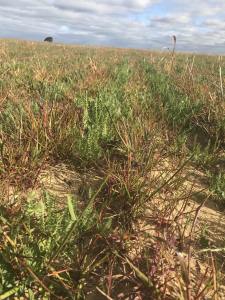 The trials clearly demonstrated that Cougar (Jaguar) is damaging to Serradellas at both the low and high rates tested, with significant damage being observed in both trials. 2,4-DB (Butress) was damaging at both rates at Clint’s site, and was somewhat damaging at Richard’s site depending on other products in a tank mix.  Generally the other products used on their own were safe to Serredalla. However when actives were combined, some damage occurred, notably high rates of Bromoxynil when combined with group B options; with Flumetsulam combinations consistently causing elevated damage.

3.2 Grass Weed Efficacy
Of the potential grass control options, Edge 900 applied at 1100 g/ha provided consistent suppression of ARG when applied as a post-emergent application. The 550 g/ha rate was not as consistent in its control, and failed to provide commercial levels of suppression at Clint’s site, which was a higher pressure situation. Further work is likely warranted to see if it can be use pre-emergent to provide better effects in higher pressure situations.
The remaining products with potential to control grass weeds (Imazamox, Amaze) returned polar opposite between the two sites. Both products generally provided good suppression to ARG at Richard’s site, but not at Clint’s. It is likely that the ARG population at Clint’s site has developed resistance to Group B chemistries due to a long history of continual cropping, whereas Richard’s is still somewhat susceptible given a cropping/pasture rotation history. While not shown in the trial results, Clethodim applied around the outside of the trial site also failed to control ARG at Clint’s.
The results on grass weeds from these trials highlight the importance of knowing your weed resistance profile when planning a pasture rotation.

3.3 Broadleaf Weed Efficacy
Of the potential Broadleaf control options, Amaze, Imazamox, Flumetsulam, Bromox and Cougar all provided good control or suppression to Capeweed. 2, 4-DB was consistently poor for broadleaf weed control and Flumetsulam (Broadstrike) was marginal. All results were consistent across both trial sites, with combinations of actives generally conferring equivalent control to the stand-alone options for capeweed. The exception appears to be when group Bs are combined with 2,4-DB, with the combination appearing to reduce the effective control of the group B component compared to its use as a stand-alone.
Selecting appropriate combinations should be made on the weed profile being targeted, crop safety and resistance status of the paddock.

4 CONCLUSION
– Knowing the resistance status of key weeds in your paddock is essential for making spray management decisions
– Cougar/Jaguar is not safe to Serradella
– high rates of Bromoxynil or 2,4-DB combined with other actives can suppress Serradella growth
– Edge 900 may be a useful management tool for ARG in Serradella pastures
– Imazamox and Amaze/Spinnaker can be useful for ARG control to susceptible populations
– Bromoxynil, Imazamox and Amaze/Spinnaker appear to provide good broadleaf control